My summer love, Orange is the New Black, has given us one of the greatest most disturbing meta stories ever: The Time Hump Chronicles. Crazy Eyes’s erotic fiction that she penned for drama class is the highlight of the show’s third season, and makes me wish it was real. The closest thing we have to it is what the script writers came up with and had actress Uzo Aduba scrawl onto curly sheets of worn paper. That is “Suzanne Warren’s” actual handwriting, and Aduba has admitted that there is a full story written out there. Can we ever hope to read it in its entirety? Praise Norma that it may be so. Until then, I have done my level best to reconstruct what the show has actually revealed to us on the written page. This is no fan fiction. You will find no poster mock-ups or vampires, especially because they’re so derivative. This is the actual text as written by our very special Crazy Eyes.

Edwina, a freckled, busty robo-doll made of pee-proof metal who can move through time in only one direction and is able to outsmart an orgasmator, but is forced to participate in a blindfolded “Trial by Lovemaking”

Gillead (aka Gilly), a sweet and sensitive man, who exists in the past and is known to have the “purest soul in the universe”; Edwina’s love interest and Space Admiral Rodcocker’s rival

Lily Sprinkle, one of Edwina’s lovers who has a pee fetish

Sunflower, one of Space Admiral Rodcocker’s lovers who is known for having taken both Rodcocks at once, and is unlikable

Unnamed Vaseline Character, a man made of Vaseline with a tragic tale

Edwina is introduced as the protagonist  who has sex with Admiral Rodcocker. She also knows and likes a young man named Gilly.

Admiral Rodcocker entered the […] the Captain’s chair. The crew saw what was to come next. “Everyone is dismissed.” said Rodcocker.

“Her three holes opened, ready to be explored by his swollen pangoline”

“The Admiral thrust his pork sword into her squish mitten.”

Edwina has romantic feelings for both Admiral Rodcocker and Gilly, and must choose between them! 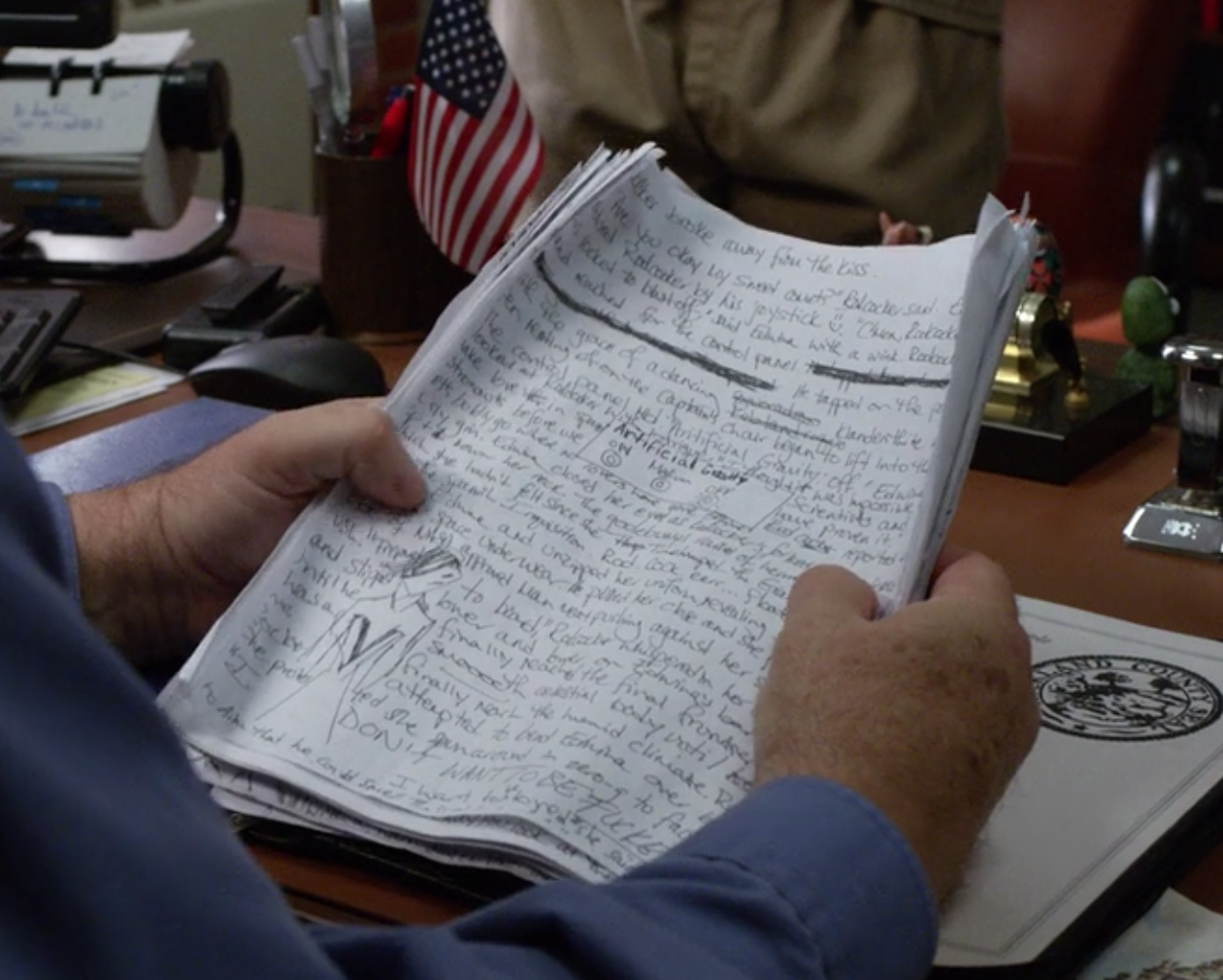 Rodcocker broke away from the kiss.

“Are you okay, my sweet comet?” Rodcocker said. Edwina grabbed Rodcocker by his joystick :). “C’mon, Rodcocker. […] rocket to blast off”, said Edwina with a wink. Rodcocker […] and reached for the control panel. He tapped on the [p…] with the grace of a dancing […]. […] resting of on the Captain’s chair began to lift into the […]. The control panel [read]: “Artificial Gravitiy: Off.” Edwina looked at Rodcocker with […]. “I thought it was impossible to make love in space. Scientists and […] astronauts before we have proven it. Let’s boldly go where no lovers have gone before.” Rod cocker reported […] sly grin. Edwina closed her eyes as Rodcocker’s forked tongue […] down her neck. The goosebumps […] of her neck […]. […] which he hadn’t felt since she timehumped  the Grand […] during the Spanish Inquisition. […] squealed in […]. Rod. Cock. Eerr…floated […]. […] behind Edwina and unzipped her uniform revealing […] love for space underwear. He pulled her close and she […] of […] approved man meat was pushing against her s[…]. “[…] prepared to board,” Rodcocker whispered in her […] and slipped lower and lower on Edwina’s body until he finally reached the final frontier […] was a smoooooth celestial body until […me]finally reach the humid climate. Rodcocker attempted to bend Edwina over but she protested. She spun around in zero-g to face […] “I DON’T WANT TO BE FUCKED. I want to be loved”, she said. […] to him that he could […].

Edwina has left Admiral Rodcocker for Gilly, primarily because Rodcocker is never fully present when he is with Edwina, since he is also concurrently with other women in other dimensions. Unnamed Vaseline Character appears as part of a brief and tragic arc.

Edwina is involved in a “trial by lovemaking”, during which she does not know one membrane from another. At some point before or after this trial, Edwina rejects Gilly (and her chance of true love) in order to go back to Rodcocker, just for the sex. Rodcocker then falls into an Orgasmator. Edwina is challenged with outsmarting the Orgasmator in order to free him.

Maybe that wormhole will open for Rodcocker again, and we will get more chapters from that sweet, sick brain. You know I’ll be watching Netflix with the pause button ready, just in case.